In the spring of 2020, we will offer a total of 6 cycling weeks. Arrival day is always Saturday. The 5 guided tours are on Sunday, Monday and Tuesday driven, Wednesday is a rest day or use as a self-guided day and then again on Thursday and Friday together. An extension week can be booked.

The level of the riders does not have to be uniform. We accompany the tour with a guide and a support vehicle. In addition  each of our bikes is equipped with a GPS tracker which transmits the position of each participant to our laptop. Stronger riders are sent on an additional loop while the less strong riders drive a shorter route. The support vehicle will always be nearby and will provide the participants with fruit cakes and drinks. A spare bike is also on board so we can react quickly with a flat tire. Your backpack with spare jersey vest or jacket can be delivered in the support vehicle.

The structure of the week is designed so that we use the first two days of the Messara flat to lay a foundation in the flat to undulating terrain. On Tuesday it will be hilly to put on Thursday after the break a highlight. Friday is again demanding and collects a lot of altitude. The support vehicle is always ready to save altitude so everyone will always enjoy the fantastic trails.

We live in Palazzo Greco and Minos. The two houses are right next to each other and after a vigorous sports breakfast start the tours at 09 clock. On the tour you will be well looked after and after the tour there will be a Cretan snack so you can relax until dinner.

For dinner we offer the following option. You can book 3 or 6 dinners or you can take care of your own.

With the bikes you can choose between a FOCUS Izalco Race Carbon with the new Shimano 105er compact or the Shimano Ultegra compact equipment.

Here are all the services at a glance:

Flight from / to your home country to Crete, airport transfer and overnight stay with breakfast in Palazzo Greco or Minos in double or single room (3 or 4 rooms on request).

optionally with 3 or 6 dinners in the tavern Pantheon. An appetizer, main course, a dessert including table water as a dish of the day or as a selection from the complete menu.

We create individual offers with daily updated fares. Since these vary greatly, depending on the accommodation and room category, we can not give you a unit price. Please take a look at "Accommodation Agia Galini" the different possibilities and contact us best by phone or mail or with the request form.

Bicycle Holidays - all year round

After the training camp season, the south of Crete remains an attractive destination for road bike enthusiasts.

We offer you an individual building block offer in which you can choose the blocks as you like:

Our parent houses are the Palazzo Greco, the Minos and the Irini Mare, all with best price promise. We search the flights for you daily and book the best airfare plus processing fee. The cycling package includes the bike rental, service fee, GPS device with 10 tours for free choice, final cleaning and maintenance of the rental bike.

Cycling in Crete is fun and you can experience a lot when you get to know country and people on two wheels. The Cretan hospitality is not a trite tourist slogan from the 80s but a thoroughly lived life principle of the islanders. That may also be one of the differences to other bike regions. Hospitality can be found in many places, but in Crete in a truly unique form. The road conditions in Crete are not fundamentally different from other cycling destinations except that there is much less traffic in Crete apart from cities like Heraklion, Chania or Rethymnon (all located on the north coast) of course.

Also in Crete you should pay attention to the road traffic regulations especially if you do not necessarily expect road traffic. The right driving is also valid here at intersections and junctions should be approached with due caution and show the motorist the respect that one expects as a road user. The Cretan car enthusiast honks to signal that he would like to overtake so it is more like a friendly gesture to understand and shows you that you are respected as a cyclist.

For our tours a tire width of 25mm is recommended which makes cycling comfortable and ensures a certain degree of safety through more contact on the road in possibly wet road conditions. The Sahara dust that blows over from the African continent in a south wind causes some extremely smooth road conditions in wet conditions. Be careful especially on downhills and in tight bends to avoid an unpleasant fall. On downhills in general is to be noted that there is always a stone on the road or a sheep crosses the road. Sunscreen in any shape should be a constant companion on every bike ride, it is recommended all creams with factor 30 or more, a high-quality sunglasses and, if necessary, headscarf / cap under the helmet. You should always and always make sure that you take enough liquid during a bike ride, as a rule of thumb is per driving hour 1 liter of liquid to drink. Finally it is always advisable to bring a cell phone.

The number of the hotel the bike center and the guide should be stored in order to be able to respond appropriately in the event of an emergency. Should you be confronted with a seemingly unsolvable problem during a tour do not hesitate to ask the islanders for help even if the communication is possible only with hands and feet it helped us - it is just the typical Cretan hospitality ....

« back to general view

For the friends of the narrow tires our road bike classics

We distinguish between the flat to hilly and the hilly to mountainous tours. In the Messara Plain we find great tracks to curl up and to train basic stamina. Bicycle Holiday guests can find extended tours with a less demanding route profile. Combination or shortcuts are very easy to plan.

The mountain tours take you to over 1,500 meters above sea level and extend in northern, north-eastern and north-western direction. From the "Uphill race tour" to Melambes to the fabulous Canyon Tour you will find unique tours through the Cretan hinterland. Beautiful mountain villages invite the Bicycle Holiday guests to stop off in small taverns to cope with the demanding tours with enjoyment.

The Messara plain is not far from Agia Galini and offers cyclists the opportunity to roll up the first days optimally in flat to undulating terrain. The lowlands are located about 65 kilometers south of Heraklion and 15 kilometers east of Agia Galini. It is almost 40 kilometers long and up to eight kilometers wide. Northwest of the plain is the Ida Mountains, which has folded up to a height of 2,456 meters and is covered in snow in the summit region until the end of May. In the south the plain is separated from the southern Mediterranean by the Asterousia Mountains, which are up to 1,230m high. So it is largely protected from the wind and offers a variety of tour options. Through the fertile plain flows the river Geropotamos which provides the water for numerous cultivated areas and thus irrigates the otherwise rain-poor area thereby well. Numerous olive plantations greenhouses and cultivated areas are proof that we are cycling here through the "pantry" of Crete. Around the archaeological site of Faistos there are many historical and cultural highlights such as Gortyn and the Monastery of Panagia Kaliviani.

The Messara flat with the fantastic road bike conditions contributes significantly to the attractiveness of Crete when talking about racing bike tours and unusual bike destinations. Rarely can you find such a pronounced lowland that can be individually adapted to your personal needs depending on the length of the route or altitude difference. In combination with the historical background it promises an interesting tour program. 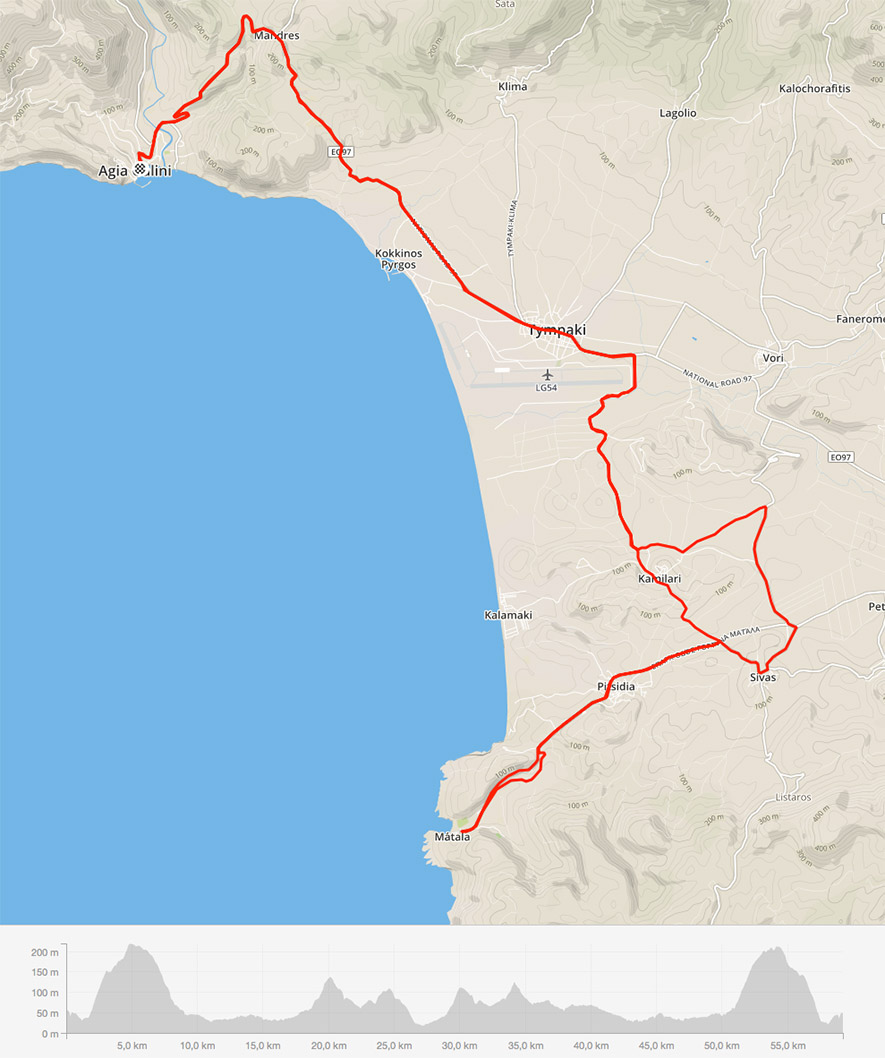 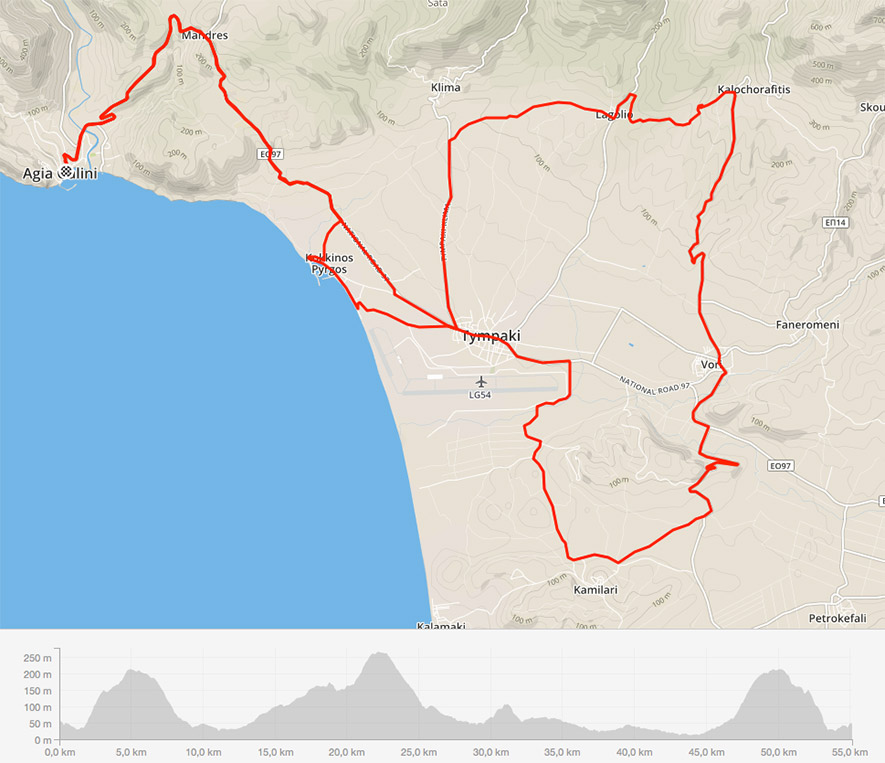 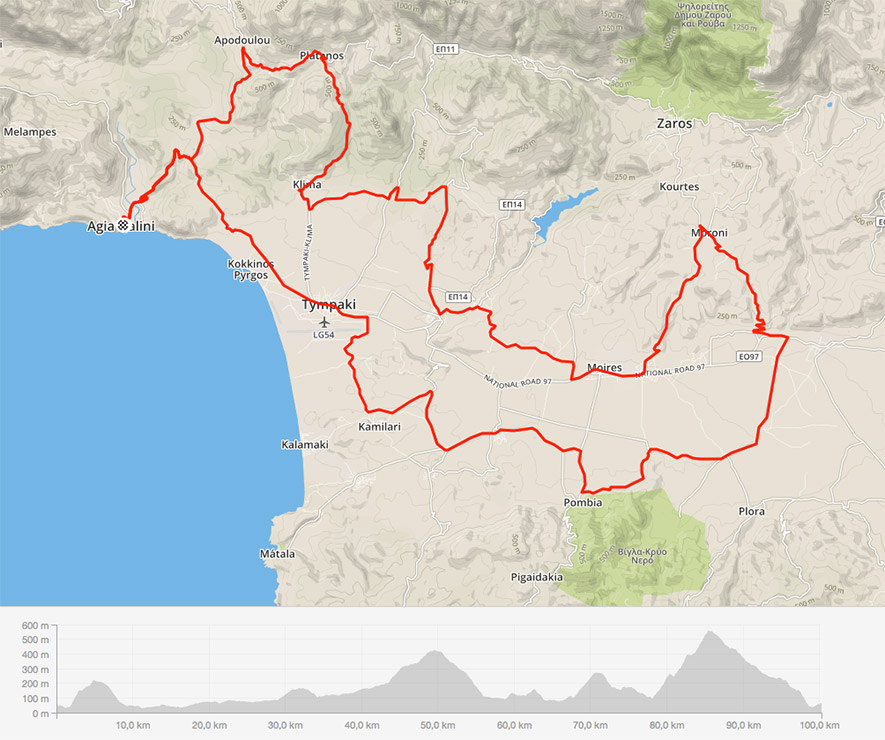 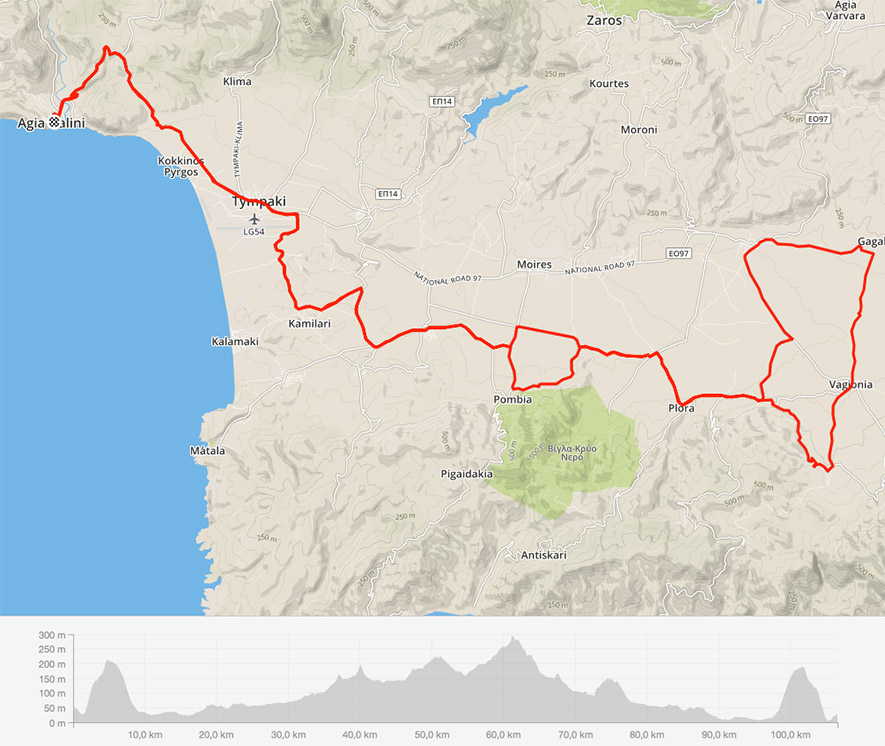 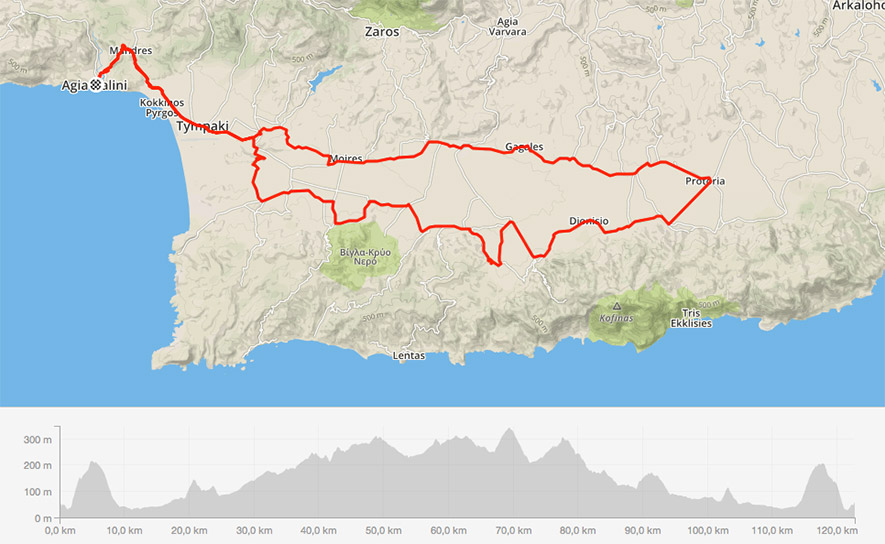 Behind the beautiful and attractive beaches of Crete lies the original and rough but fascinating face of the island. And so we are the second essential feature that makes Crete an exceptionally attractive cycling island. The little developed mountain landscape of the individual provinces around Agia Galini are ideal for cycling, there is virtually no traffic and the typical Cretan hospitality in the original villages of the individual mountain regions always invite you for a stopover. If you arrive with enough winter or spring kilometers in your legs, you will love these tours.

The always varied route profile with a gigantic landscape that you would not expect so safe on Crete guaranteed driving pleasure without end and incidentally, is also the desired training effect with a. Of course, the classic views of over 1500 meters on the dreamlike Mediterranean are not missing and one or the other "Ah" and "Oh" will come to you over the lips.

Day trips of 60 to 160 kilometers can be planned, the possibilities of the combination are endless. 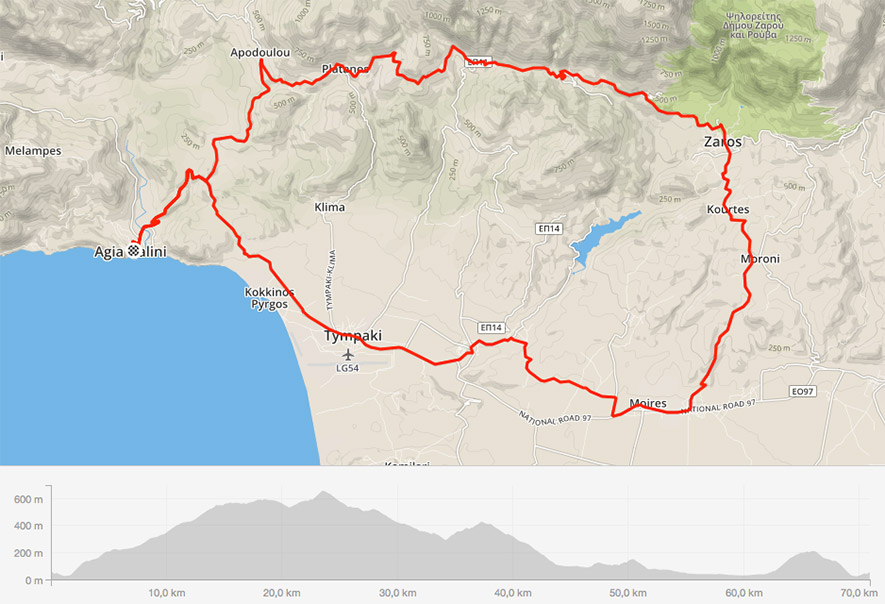 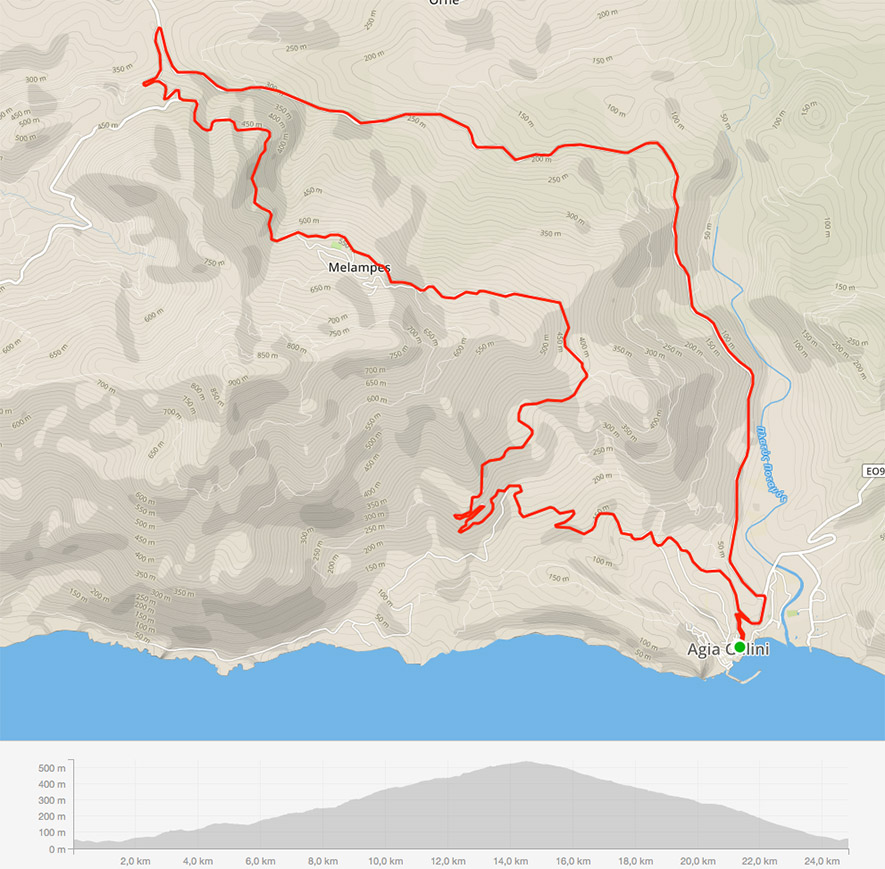 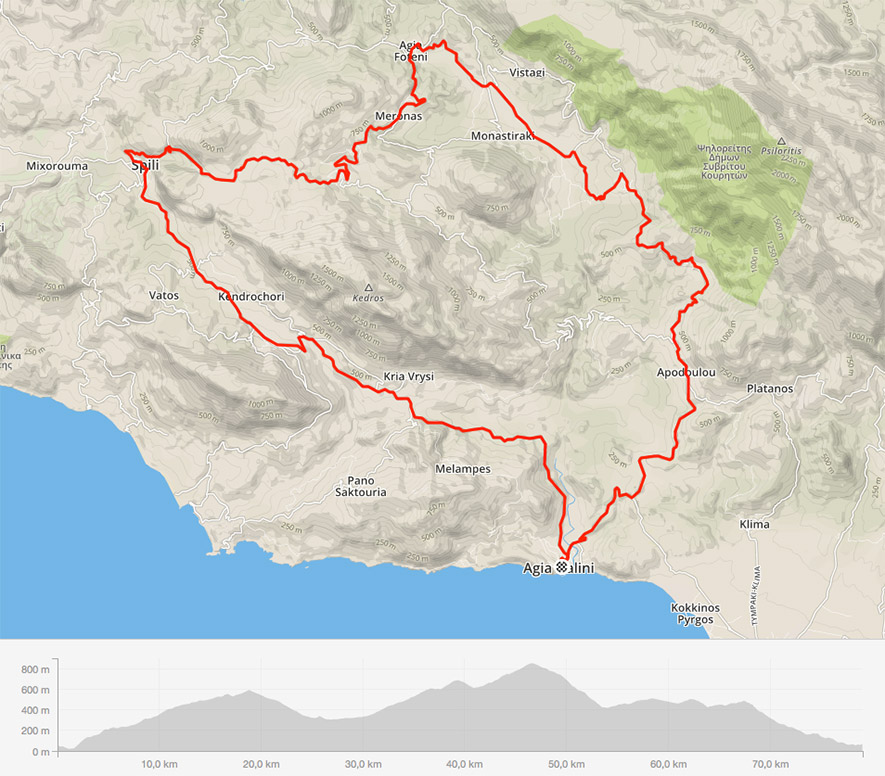 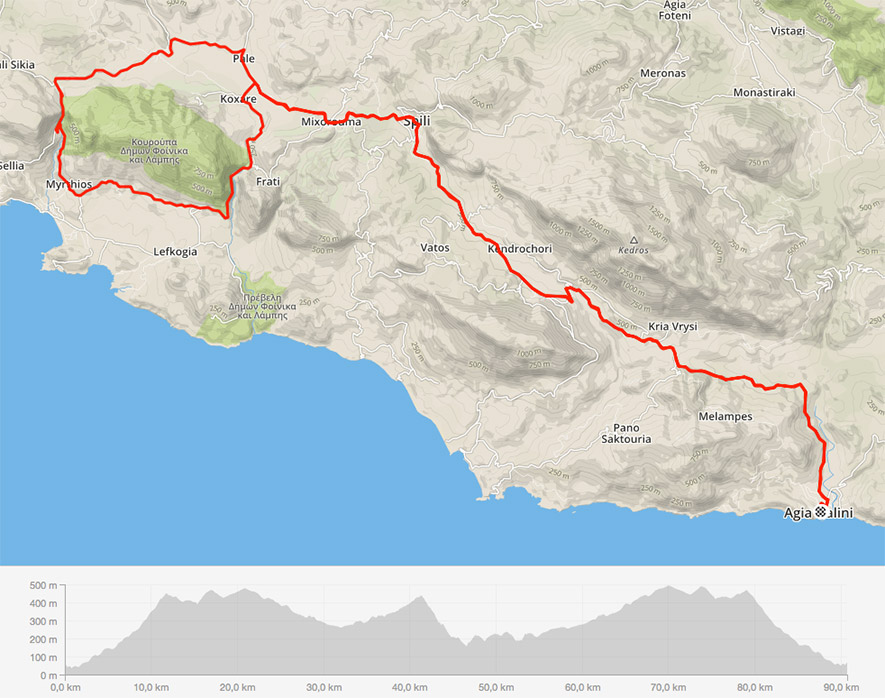 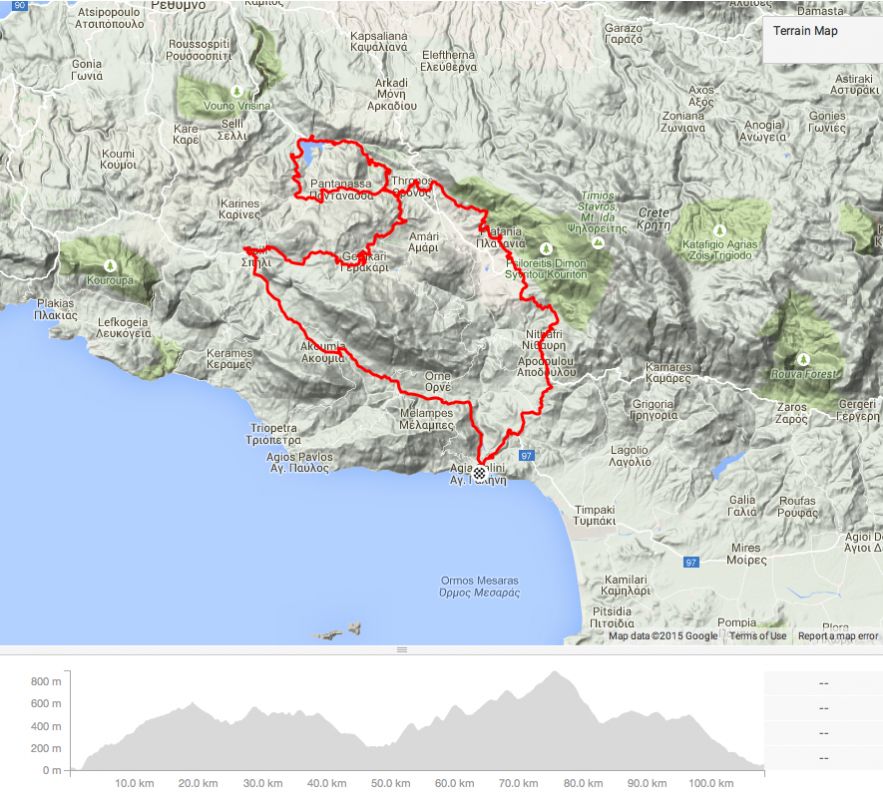 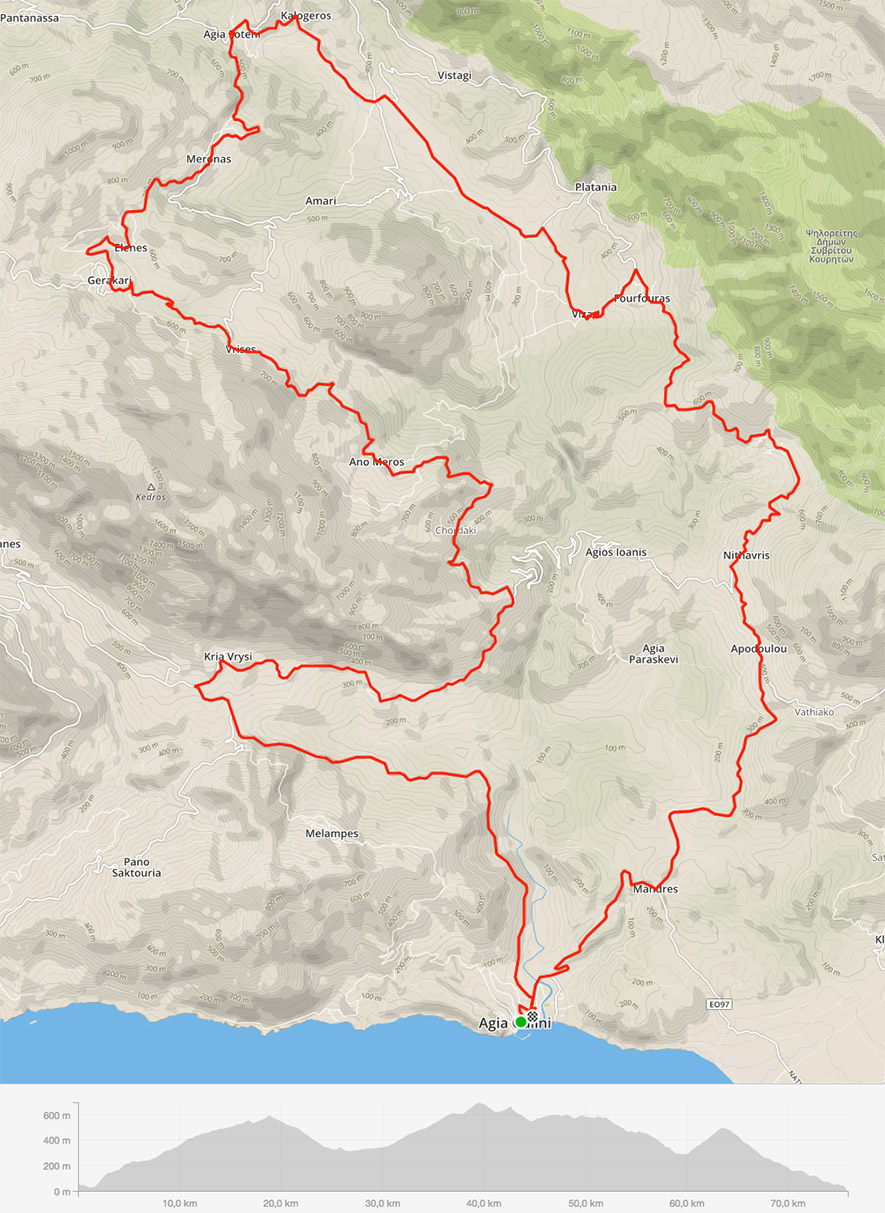 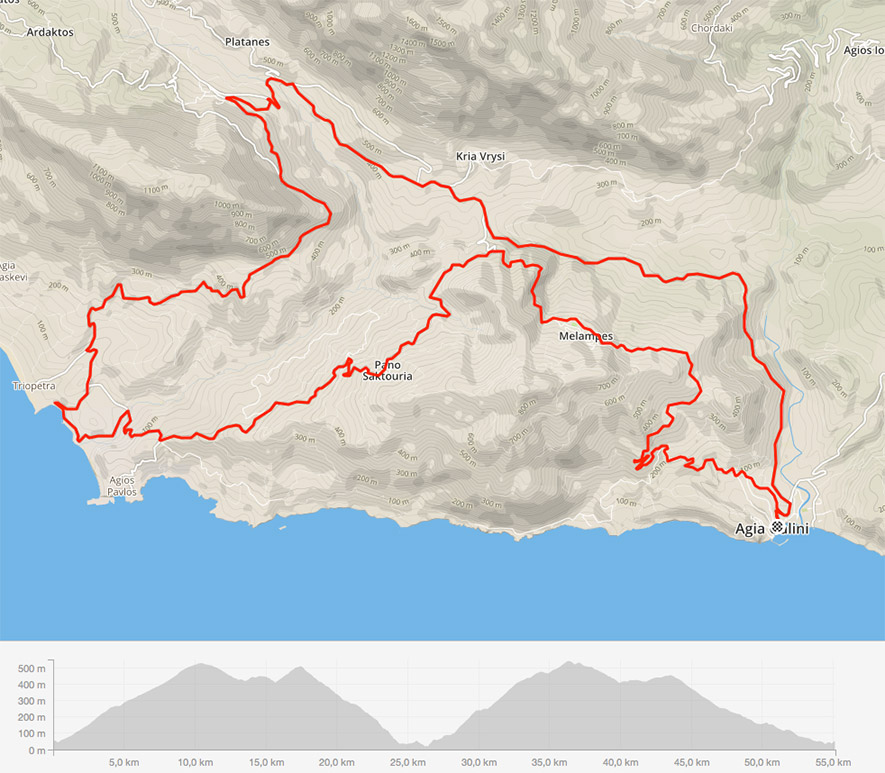